This is the "ashcan" edition of the Maximum Recursion Depth RPG. I have larger plans for this game, but life calls. If you like this game, please let me know! I'm gauging my options for taking this further so comments, either constructive criticism or general support, would be much appreciated!

If you like this and are interested in more of my work, check out my tabletop RPG blog: Weird & Wonderful Worlds

The full release is now available! You can find it here on itch.io, drivethrurpg, or...

In PRINT+PDF on Exalted Funeral!

Below is the Introduction from the book:

1000 years ago the Monkey King challenged Buddha in Heaven and won. The Karmic Cycle was thrown into disarray, Poltergeists in a fugue-like state roamed the Earth wreaking karmic destruction, nature spirits spontaneously summoned to the material world, and refugee gods and other heavenly creatures fled from Heaven to Earth.
500 years ago some of the Numberless Courts of Hell rose to Earth to serve as a global, nongovernmental bureaucracy, but Devils are like machines, they are only as functional as the system they were designed for, and the system is broken.

Today, you are Recursers; individuals capable of tapping into Poltergeist Forms to leverage powerful karmic forces. After their day job, parties of Recursers known as Poltergeist Investigators seek to find roaming Poltergeists and escort them to the appropriate Court of Hell, or are hired by the Poltergeist’s loved ones.

Some Recursers see themselves as revolutionaries, while others see what they do as just a civic duty. But keep in mind, Maximum Recursion Depth is a world of **Karmapunk**, and that means you aren’t just rebelling against the broken system, you’re also rebelling against yourself. You are a product of this broken Karmic Cycle, and no matter how well-intentioned, you’ll never solve the problems of the world if you can’t come to terms with yourself.

So go out there, acquire Karmic Attachments, accrue Karma to grow more powerful, help people and make the world a better place. But remember, you also have to resolve those Karmic Attachments, you have to divest that Karma, and detach from the material world, despite what that entails. Or else, obscured by the imperfections of the World from the Karma you’ve accrued, all that effort will merely exacerbate the problems, and unknowingly you will spiral down, and then it’s only a matter of time before you reach **Maximum Recursion Depth**. 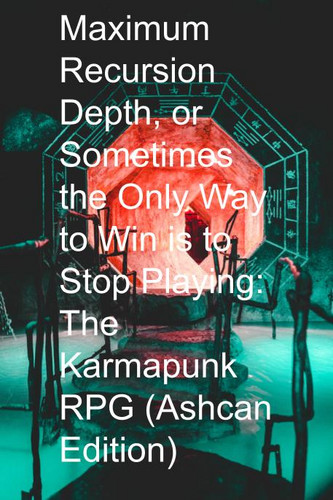